Member of the Tribunal since 1 October 2011

Professional Experience: Third Secretary, Treaty and Legal Department, Ministry of Foreign Affairs (1991–1992); Assistant to the Deputy Foreign Minister and to the Head of the National Committee on Disarmament (1993–1994); Third, Second and First Secretary, Legal Adviser, Permanent Mission of Ukraine to the UN, New York (1994–1997); Adviser to the President of the UN General Assembly (1997–1998); Deputy Director, Deputy Director-General of the Treaty and Legal Directorate, Ministry of Foreign Affairs (1998–2001); Alternate Representative of Ukraine on the UN Security Council (2001); Deputy Permanent Representative of Ukraine to the UN (2001–2004); Director, Department of the UN and other international organizations, Ministry of Foreign Affairs (2004–2006); Deputy Director, Foreign Policy Directorate of the Secretariat of the President of Ukraine (2006–2008); Ambassador Extraordinary and Plenipotentiary of Ukraine to Romania (2008–2011).

Member: Delegation of Ukraine at the sessions of the United Nations General Assembly (1994–2007); Representative to the Third Committee (Social and Humanitarian issues, Human rights, 1994–1997) and to the Sixth Committee (Legal matters, 1995–1997, 1999–2003); Commission on Social Development (Rapporteur at 34th session, 1995); Special Committee on the Charter of the United Nations and on the Strengthening of the Role of the Organization (1995–2003, Vice-Chairman 1998, Chairman 2002); Delegation of Ukraine at sessions of Assembly and Council of the International Seabed Authority (1995–1998); Delegation of Ukraine at meetings of States Parties to the UN Convention on the Law of the Sea (1996–1999, 2001–2003, Vice-President, 12th Meeting 2002); Ad Hoc Committee on the Scope of Legal Protection under the Convention on the Safety of UN and Associated Personnel (Head of Delegation of Ukraine, 2002); Ad hoc Committee on jurisdictional immunities of states and their property (2002–2004); UN Committee for Programme and Coordination (Chairman at the 45th session, 2005); Council of Europe Committee of Experts on Terrorism (2006); OSCE Working Group on the draft convention on the international legal personality, legal capacity and privileges and immunities of the OSCE (2006–2007); Head of Delegation of Ukraine at the 24th Meeting of the Council of Ministers for Foreign Affairs of the Organization of the Black Sea Economic Cooperation, 2011; List of Arbitrators of the Maritime Arbitration Commission at the Ukrainian Chamber of Commerce and Industry (MAC) (2013-present). 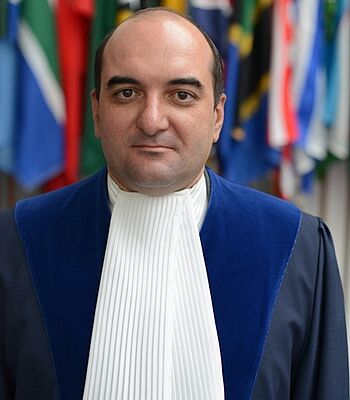