The seat of the Tribunal is in the Free and Hanseatic City of Hamburg in the Federal Republic of Germany. The main entrance to the Tribunal is to be found at Am Internationalen Seegerichtshof 1 in Nienstedten, a village to the south west of the centre of Hamburg.

The Free and Hanseatic City of Hamburg was chosen to be the seat of the Tribunal by the representatives of the States participating in the Third United Nations Conference on the Law of the Sea by secret ballot on 21 August 1981. The choice of Hamburg, a well-known port city reputed for its long tradition in international shipping and maritime trade, is reflected in article 1, paragraph 2, of the Statute of the Tribunal.

In 1986, Germany offered to provide premises for the Tribunal at the expense of the Federal Government, including a substantial contribution from the City of Hamburg. An architectural competition was held in 1989 to select the design of a suitable building to house the Tribunal. The first prize was awarded to the firm of Baron Alexander and Baroness Emanuela von Branca. The foundation stone of the permanent headquarters was laid by Boutros Boutros-Ghali, Secretary General of the United Nations, on 18 October 1996 at the site on the Elbchaussee. Pending construction of the headquarters, temporary premises were made available to the Tribunal from its first session in October 1996 until 2000.

The joint ceremony of the Tribunal, the Government of the Federal Republic of Germany and the Senate of the Free and Hanseatic City of Hamburg for the official opening of the permanent premises of the Tribunal took place on 3 July 2000. At the ceremony, statements were delivered by the Secretary-General of the United Nations, Mr. Kofi Annan; President Chandrasekhara Rao; the Federal Minister of Justice of the Federal Republic of Germany, Mrs. Herta Däubler-Gmelin; the First Mayor of Hamburg, Mr. Ortwin Runde; and Registrar Chitty. The ceremony was attended by the Vice-President and other judges of the Tribunal and high dignitaries, including the President of the Meeting of States Parties, Mr. Peter Donigi; the Legal Counsel of the United Nations, Mr. Hans Corell; Ministers and other Government representatives and representatives of international organizations.

Constructed by the German Government at a cost of EUR 63 million, the headquarters are provided to the Tribunal rent-free. The Tribunal's headquarters include a modern concrete and glass building, as well as a nineteenth-century villa. The premises cover an area of 30,090 square metres.

The Agreement between the Tribunal and the Government of the Federal Republic of Germany on the Occupancy and Use of the Premises of the International Tribunal for the Law of the Sea in the Free and Hanseatic City of Hamburg (Additional Agreement) of 18 October 2000 establishes the terms and conditions under which the premises are made available by the Government to the Tribunal. 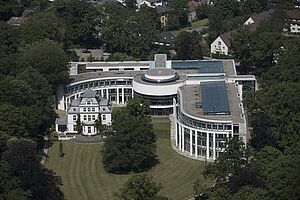 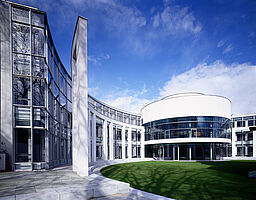 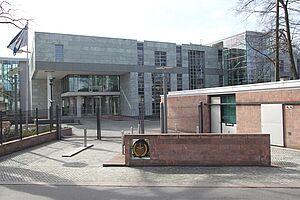 The conference room leading off the rotunda is used for presentations given during visits as well as for lectures, conferences and workshops organized by the Registry. The lectures given during the Summer Academy of the International Foundation for the Law of the Sea are held here. 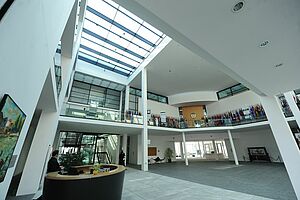 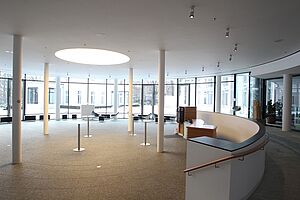 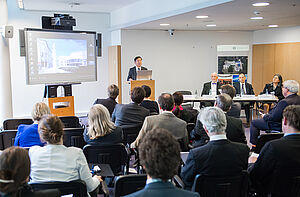 Fully-equipped conference rooms are placed at the disposal of the parties for the duration of hearings.

A permanent audio-visual exhibition provides visitors with general information about the history, organization, jurisdiction and work of the Tribunal. The model of the building, given to the Tribunal by the architect, Emmanuela van Branca, is an integral part of the exhibition.

The main courtroom, used for plenary sittings of the Tribunal and of the Seabed Disputes Chamber, seats up to 250 people. The bench has seating for the Members of the Tribunal, judges ad hoc and for experts appointed under article 289 of the Convention.

There are two smaller courtrooms to be used for sittings of the chambers of the Tribunal and any ad hoc chambers that might be established at the request of the parties to a dispute.

Each courtroom is equipped with modern courtroom technology, enabling the parties to give presentations which appear on monitors before the judges, parties, witnesses, interpreters and the public. In accordance with the Rules of the Tribunal, a hearing may be held entirely or in part by video link. A hybrid hearing may be arranged with members of the bench and/or delegations either present in the courtroom or connected via video-link. Interpretation booths and media transmission services are also installed. 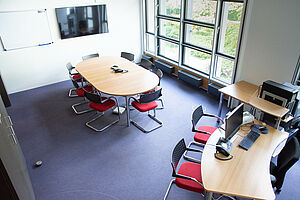 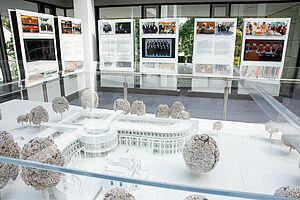 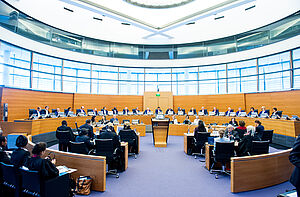 The offices of the Members of the Tribunal are located in the Judges’ wing of the building. Additional offices are available for Judges ad hoc and experts.

There are three deliberation rooms for judicial deliberations as well as for use during the administrative sessions of the Tribunal. 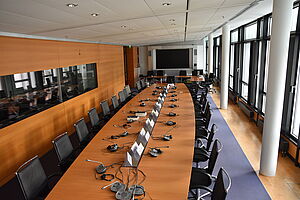 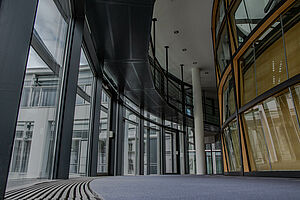 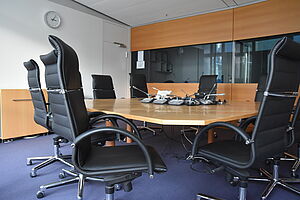 The Tribunal's Registry is made up of the following departments:

The Tribunal maintains a specialised library with a  comprehensive collection on the law of the sea and related subjects such as maritime law, environmental law, ocean affairs, coastal management, international organizations, dispute settlement, arbitration, and general issues of public international law. The Library’s facilities include a main library containing the monograph collection, a library annex containing the serials and periodicals collection, and a reading room. 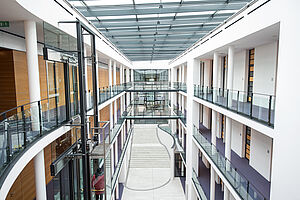 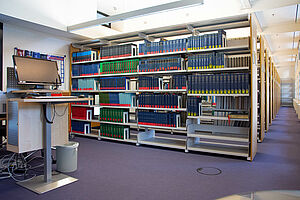 In 1870 the banker Frensdorf bought the land on which the Tribunal is now situated and constructed the villa in 1871. Six years later, J. Rudolf Freiherr von Schröder, from whom the villa gets its name, bought the property. The villa was extended in height in 1905 by Martin Haller, the architect who was also responsible for Hamburg's City Hall.

Today, the Tribunal uses the villa for official receptions, meetings and training programmes. It also serves as headquarters for the International Foundation for the Law of the Sea. 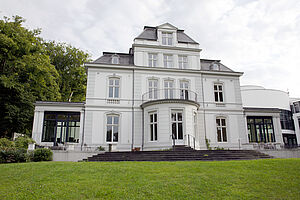 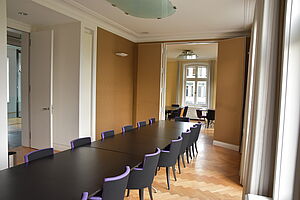 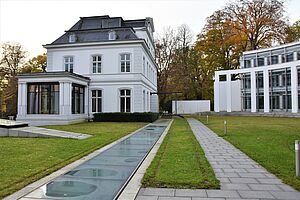 Inquiries regarding the use of the premises should be addressed to the press office. 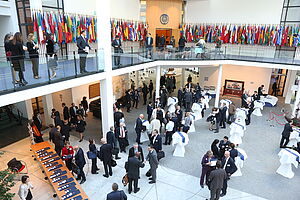 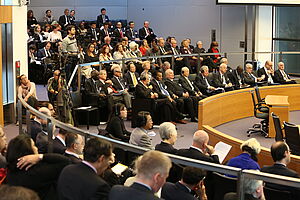 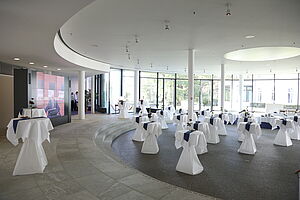 Visits are organized for legal practitioners and associations, law students and the general public. Each visit offers the group the possibility of viewing the courtroom, touring the building and hearing a presentation on the Tribunal in English, French or German. 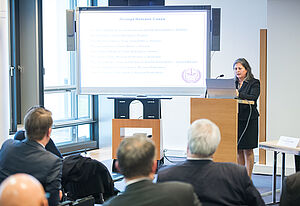 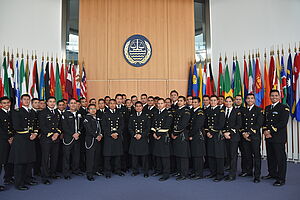 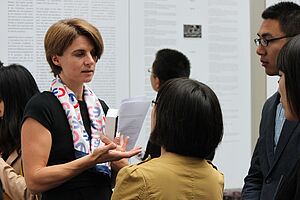