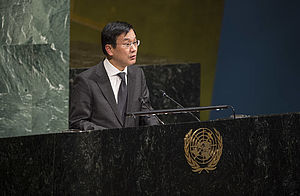 It is my pleasure to introduce the Tribunal's new quarterly newsletter, designed to keep those interested in the work of the Tribunal abreast of developments relating to our judicial work, to events being held at the Tribunal and to our capacity building programmes. We hope that the newsletter provides you with an interesting read.

One of the highlights of my first few months in office as President was addressing the United Nations General Assembly and meeting the Secretary-General, Mr António Guterres, in December 2017. It is fifty years since Dr Arvid Pardo’s memorable statement before the General Assembly, in which he urged delegates to consider the resources of the oceans beyond national jurisdiction as the 'common heritage of mankind' and called for a regime to administer these resources. Often called the 'Father of the law of the sea conference', Dr Pardo's vision and dedication was instrumental in the organization of the Third United Nations Conference on the Law of the Sea and the drafting of the United Nations Convention on the Law of the Sea and it is remarkable to see how this instrument has stood the test of time, how the drafters of the 1970's and 80's not only managed to create a legal regime for the seas that worked back then but that is still highly relevant today, particularly in the context of the ongoing discussions on the conservation and sustainable use of marine biological diversity.

As the Convention maintains its relevance, so too does its dispute settlement mechanism and, as I mentioned in my statement before the General Assembly, I am confident that the future work of the Tribunal, as one of the key fora for the settlement of disputes relating to the Convention's interpretation and application, will encompass a variety of topics relating to environmental matters, maritime delimitation or the arrest and detention of vessels, as well as to emerging issues, such as marine biological diversity.

I would like to take this opportunity to emphasize that you are welcome to visit us at the Tribunal, it would be a pleasure to see you at either a public sitting, event, conference or seminar.

Ghana and Côte d'Ivoire have agreed to implement the decision of the Special Chamber of the Tribunal delimiting the territorial sea, exclusive economic zone and continental shelf boundaries of the parties, including the boundary of the continental shelf beyond 200 nautical miles. A joint communiqué issued by President Akufo-Addo of Ghana and President Ouattara of Côte d’Ivoire, at the close of the latter’s visit to Ghana on 16 and 17 October 2017, "acknowledged the spirit of brotherliness with which the maritime dispute between the two countries was handled from the beginning” and “expressed their commitment to ensure the smooth implementation of the ruling by the Special Chamber of the International Tribunal of the Law of the Sea (ITLOS) on the delimitation of the maritime boundaries between the two countries." In order to achieve this, the two leaders announced the establishment of a joint committee for the implementation of the judgment. 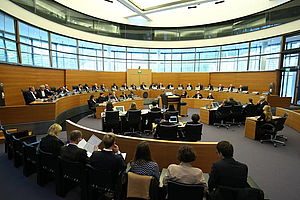 As announced by the President in his statement before the United Nations General Assembly, oral proceedings will be held in The M/V "Norstar" Case (Panama v. Italy) in autumn this year. In November 2017 the Tribunal authorized a second round of written pleadings and fixed the time-limits for the filing of a Reply by Panama and a Rejoinder by Italy. The written phase of the case will close in June 2018 and oral proceedings on the merits are planned for autumn 2018. 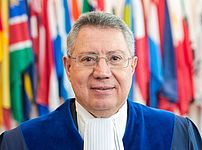 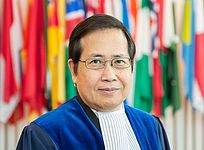 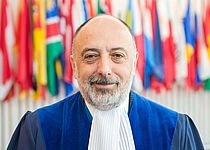 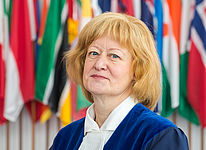 The election of five new judges to the Tribunal's bench: Mr Oscar Cabello Sarubbi of Paraguay, Ms Neeru Chadha of India, Mr Kriangsak Kittichaisaree of Thailand, Mr Roman Kolodkin of the Russian Federation and Ms Liesbeth Lijnzaad of The Netherlands, brings fresh expertise and experience from the world’s judicial systems to the Tribunal. Three of the new judges have their own experience of standing on the other side of the ITLOS bench: Judges Chadha, Kittichaisaree and Lijnzaad have represented their States as counsel in Responsibilities and obligations of States sponsoring persons and entities with respect to activities in the Area (Request for Advisory Opinion submitted to the Seabed Disputes Chamber), Request for an advisory opinion submitted by the Sub-Regional Fisheries Commission (SRFC), The "Arctic Sunrise" Case (Kingdom of the Netherlands v. Russian Federation) and The "Enrica Lexie" Incident (Italy v. India). 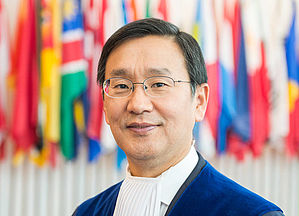 Challenges, highlights and the future:

For me, the greatest challenge I face as President is to make the Tribunal the preeminent body for law of the sea related disputes. Obviously there are other avenues under Part XV of the Convention which parties to disputes may explore but it is my wish to establish the Tribunal as the foremost judicial body for dispute settlement for law of the sea related cases. The Tribunal has made great progress since its foundation in 1996 but it needs to grow, it needs to have a steady influx of cases to work on, to build its credibility and its reputation.

On a personal level, reviewing my near nine years of work as a Judge and now as the Tribunal's President, the Bangladesh/Myanmar and Ghana/Côte d'Ivoire boundary delimitation cases are the ones which could be considered the highlights of my time here so far. That being said, it is highly rewarding to see how urgent proceedings can be instrumental in resolving a dispute, as was the case with the provisional measures prescribed in the ARA Libertad case, and how the recommendations given in the Tribunal's advisory opinion in case no. 21 are being implemented to assist the Member States of the SRFC to combat and prevent IUU fisheries in the waters off the coast of West Africa.

I am optimistic about the future. In due course I think that we will see States making use of the advisory competence of the full Tribunal, this is a function which I believe has a lot to offer. I also see the great potential for States in establishing a special chamber of the Tribunal, coupling the benefits that the Tribunal can offer as a permanent body with the flexibility in composition of the chamber. Parties should certainly consider exploring such an option, as did Ghana and Côte d'Ivoire, where the Chamber's decision has led to a successful and amicable conclusion of the dispute.

Judge David Attard, Vice-President of the Tribunal, gave a keynote statement at the symposium ‘Perspectives on Global Ocean Governance: Where do we stand and where do we go from here?’, organised by the Ministry for Foreign Affairs and Trade Promotion of Malta, in collaboration with the International Maritime Law Institute, in Valetta in December. The Registrar, Mr Philippe Gautier, participated in a panel debate on the future of Global Ocean Governance. Focusing on the current problems facing ocean governance, Mr Gautier addressed the topic from the point of view of dispute settlement mechanisms. 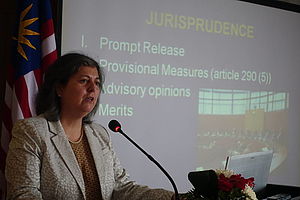 Further afield, the Deputy Registrar, Ms Ximena Hinrichs Oyarce, represented the Tribunal at the first ASEAN-UN Training Workshop on the Law of the Sea, held in Jakarta from 12 to 14 December. At the invitation of the UN Division for Ocean Affairs and the Law of the Sea, who organized the event in cooperation with the Indonesian Authorities, the Deputy Registrar had the opportunity to inform delegates from all ten ASEAN States about the work of the Tribunal and its potential role in the settlement of disputes. Other topics discussed at the workshop were the implementation of the 2030 Agenda for Sustainable Development and a sustainable oceans economy, maritime delimitation, marine scientific research and marine biodiversity, climate change and maritime security.

A lively round of presentations and discussion on topics as diverse as unmanned ships, maritime dispute resolution avenues and the delimitation of the continental shelf, given by the outgoing group of interns from the Legal Office and Library shortly before Christmas, brought their three-month internships to a close. We are pleased to welcome four new interns to the Legal Office for the January to March internship period: Ms Sandrine de Herdt (Belgium/Burkina Faso), Mr Egor Fedorov (Russian Federation), Ms Sicen Hu (China) and Mr Mitchell Lennan (United Kingdom) will be working with the Legal Office.

The seven fellows participating in the 2017/2018 ITLOS – Nippon Foundation Training and Capacity-building Programme on Dispute Settlement under the United Nations Convention on the Law of the Sea (Mr Harvey Mpoto Bombaka, Democratic Republic of the Congo; Mr Nigel Browne, Trinidad and Tobago; Ms Yara Karam Elabd, Egypt; Mr Nicholas Ioannides, Cyprus; Mr Eduardo Jimenez Piñeda, Spain; Ms Mutty Ashila Reza, Indonesia; and Mr Sergey Zaytsev, Russian Federation) have returned to Hamburg after their research stage at the Max Planck Institute for Comparative Public Law and International Law in Heidelberg to continue attendance of the series of law of the sea lectures at the Tribunal on topics such as activities in the Area, nationality of ships, maritime delimitation, responsibility of States for fisheries activities in the EEZs of other States, RFMOs, human rights at sea, climate change and the marine environment. The fellows and interns visited the Federal Institute for Geosciences and Natural Resources in Hannover in January, where officials from the Institute introduced the work being carried out on behalf of the Federal German Government under the German exploration licenses for manganese nodules and environmental investigations in the equatorial north-eastern Pacific Ocean and for massive sulphides and environmental investigations in the western Indian Ocean. They also presented the Institute’s large-scale equipment for marine resource exploration. During a study-visit to Brest, France, in the penultimate week of January, the seven fellows visited the Centre d'expertises pratiques de lutte antipollution, the Centres de sécurité des navires, the Service hydrographique et océanographique de la marine (SHOM) and the Préfecture maritime de l'Atlantique. 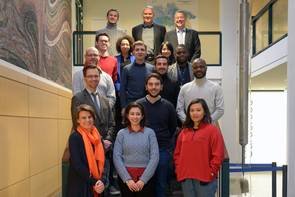 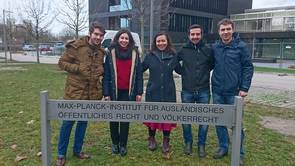 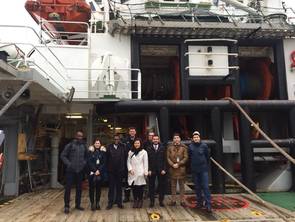 Adonis Tafangy, ITLOS intern in 2007 and fellow in 2014/15, Director of Legal Affairs of the Maritime Administration of Madagascar 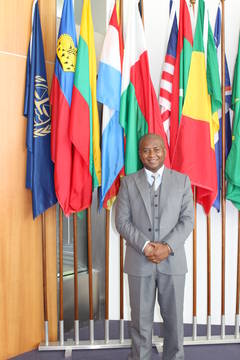 My first day at ITLOS was memorable. I was mesmerized by the building itself. I must admit that it is not common to see such a kind of building, made of glass and steel, in Madagascar. Day after day during my internship, I discovered more about the way the tribunal works. I tried to get the maximum from the facilities, library and online resources, to know the most about law of the sea in general and dispute resolution in particular. At the end of my internship, a part of me wanted to spend more time in that very special environment, so when a second chance came with the fellowship programme, I did not hesitate to apply. I was very lucky to become a “NIPPON Fellow”, so excited at the idea that I was going to stay there for almost a year! To make it short, the 9 months spent at ITLOS were lived to the fullest. It was an incredible experience to meet the judges directly, to talk with them, to learn from them, and even to tell jokes with them. I have learnt a lot from my experience at ITLOS, both from the internship and the fellowship. I am fully using that knowledge in my current position of Director of Legal Affairs of the Maritime Administration of Madagascar, and mostly in bringing Madagascar’s maritime legislation up to international conventions’ standards. My passages at ITLOS have also given me the great chance to have a large number of international friends sharing the interest of the development of the law of the sea. I was lucky to be part of ITLOS’s story. Actually, I still am.

The International Foundation for the Law of the Sea will host its annual ‘Maritime Talks’ at the Tribunal on Saturday, 17 March 2018 on the topic “Migrants at Sea - Practical and Legal Aspects of the Refugee Situation in the Mediterranean". For further details see the IFLOS website.

The 12th IFLOS Summer Academy, 'Promoting Ocean Governance and the Peaceful Settlement of Disputes', will be held at the Tribunal from 22 July to 17 August 2018. Applications for the programme may now be submitted via the IFLOS Summer Academy website.